When we bought the 14 acres next door, we knew there was an old well there, but the seller did not make any guarantees on it. The cost of drilling a well is really steep, so we hoped we would end up with a well that worked... The well house is long gone, but they had put cattle panels around the wellhead to keep out livestock and deer. The yaupon, however, had completely covered the area. After we closed on the land, Dan began cleaning up the area and found that the pressure tank looked fine, but we still had no electricity. He also found part of an old septic system with field lines.  In order to test the pump, we needed electricity, thus necessitating the services of an electrician. Doesn't sound too hard, right? Wrong!

I think Danny called two or three electricians who siad they would call him back and never did. You'd think there was no recession going on. I finally did phone-a-friend on TexAgs.com and "Dubi" came through with a great referral in Atlas Electric in Bryan. 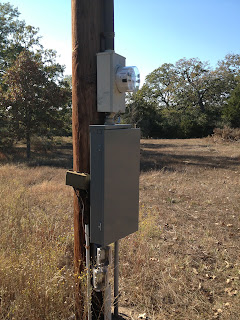 I spoke with the owner and described what we needed and then an electrician worked with Danny on setting up a time. On Friday, he met with the electrician and we got a 200 amp box, two GFI weather resistant convenience outlets, and, more importantly, power to the well!  Danny called Bluebonnet Electric and the lineman came right out and connected power to our box. That afternoon,the Dans went out and started it up and the pump started pumping and the water started flowing! We needed about three dollars worth of plumbing parts and we were in business. Today, we ran the water into a gully for about an hour. The water is clear and cool and very tempting!  However, knowing that the well has been open a while, we are going to have the water tested before we taste any of its goodness. Having water and electricity places us much closer to Danny building his house! We also won't have to haul water for the livestock! Amazing how handy first-world utilities are!

Speaking of livestock, I've been scouring the Brazos Valley looking for does. I visited one place in Grimes County where the woman said she had 30 goats and needed to sell a couple to relieve overcrowding. Well, it was pretty crowded all right: eight cows, one bull, 30 goats of various breeds, ages, and sizes, seven turkeys, at least 50 ducks, two Great Pyranees guardian dogs, 12 guineas, three kittens, a llama, innumerable chickens, and a miniature weiner dog. Oh, yeah, and a macaw. All in one enclosure. Wow.  One Boer doe had two kids, just a few days old, and they were being trampled by large dairy goats. The woman remarked that one was limping. Well, duh! Needless to say, I let her know the next day that I didn't think they would fit into my herd.

At an impasse, I blindly contacted a guy with a $1000 buck for sale on Craigslist, asking for advice on where to buy does. He not only emailed me back, he gave me some leads on commercial breeders in Burleson County. I called one man who said he did not sell fewer than ten at $250 each because it wasn't worth his time. He suggested I go to Navasota  Livestock Auction.

Of course! I don't know why I didn't think of that sooner.  The auction is open most Saturdays and is well-attended. I went yesterday just for a little reconnaissance. I saw lots of goats, including goats that looked like they might fit into my herd. I hadn't planned to buy goats, but I did!  They sold at least 35 goats on Saturday, and I got five of them. The auction starts with goats (lucky for me!) and the first two out of the shoot were two white dairy goats from the Grimes County place I visited on Thursday! I saw the woman sitting down front. The next goat out was a very pregnant Boer with a nice udder and I was the high bidder for her. The woman turned around and glared. Guess she was mad I didn't spend money on her goats! I ended up with five does: the pregnant traditional one, a white spotted LaMancha cross (can't miss those ears! Oh, they ARE missing..), a pregnant Boer cross, a red Boer cross, and a traditional Boer doeling.  We picked them up on Sunday and left them in the trailer for a while, so they calm down from the highway ride. When I opened the door, they jumped right out, eager to eat and greet.

So now, time to plan the nursery. The new Boer looks ready to pop and should kid within the week. The agouti pygmies (I call them the Oreos) are both pregnant and are anywhere from 3 to 5 weeks out. I am pretty sure that the two young does I bought with Billy (Doll and Belle) were exposed in October. As for the others, only time will tell.

Finally, I contacted the State Veterinarian's Office and was issued a herd number for the Scrapies Eradication program. They will be sending me All-Flex eartags with my herd number and individual numbers. As soon as they arrive, I can start tagging the herd. My big question involves the LaManchas--- do I tag their ears?


Posted by Unknown at 8:55 PM No comments: Links to this post

The first six were bought for cheap off Craigslist and are pygmy/Nigerian dwarf goats. One polled black buck, a brown nanny, two black agouti does, a white La Mancha wether, and a tan wether.  I found them in Navasota, about a zillion miles down a narrow gravel road. The owner was selling them. He had a good perimeter fence, but was surprised that the goats were eating the wooden posts holding up the porch on his fake log cabin house. Duh. When we drove up, Dan noticed a horse standing on the front porch. We got a little closer and discovered there were two horses on the porch (the sorrel was camouflaged against the faux logs). I had to move the palomino to ring the doorbell, but they weren't home.

Went around back and saw that one doe had jumped out of the three foot high pen he built. The palomino tried to help me corral her, but we ended up waiting for the guy to come home and help us shove them all in the trailer. Don't think this guy knew much about livestock. The wife said the horses get on the porch and ring the doorbell, which is kinda funny, but odd.  This was a weeknight and by the time we got to the farm, it was very dark. We pulled in, opened the trailer and had to drag them out. The donkeys were not well-pleased. At all. No-sirree-Bob. We left the trailer at the farm with the door open to give the goats a place to hang out.

Things settled down a bit after a few days. This week, we picked up a boer buck, two boer-type does, and a huge white wether from a woman in Wellborn. I visited her one day and liked the two-year old buck. She also had the two does. I made an offer to buy the buck on the condition she sell me the does, too. I could tell she was attached to Belle and Doll, but she had decided to go with dairy goats instead of meat goats. The next day, she let me know that she would part with them. We rolled up to her mansion and loaded the girls in the trailer, thinking it would be easier to load the buck if the girls were on board. Dan backed the trailer to the gate in the buck pen and we got his large self loaded. At that point, the seller turns to me and says, "You need to take Billy (he's the wether). He's too rowdy for the dairy does and he'll be lonely." Uh, okay. So we loaded him, too.

This time, we got to the farm and it wasn't quite dark. The donkeys and goats were hanging out together in the picnic area like old friends. We opened the trailer and got the buck out. The two does are like teenage girls at a party who don't know anyone, all skittish and noisy. We stayed a while to make sure the two bucks would not kill one another.

Today, I got out to the farm and saw the donkeys near the fence when I drove up. I rolled down the window and told them to meet me at the picnic area. They never showed, so I went looking for them. Found them guarding the goats! Convinced them to come with me and the entire herd followed me to the round pen. Gave the donks their boosters first and turned them out. I coerced the goats into the pen and shut the gate. For the first time ever, Molly McButter (momma donkey) started making donkey sounds! The donks were distraught, so I let them in the pen with the goats. Then we gave the first six goats their initial 8-way vaccine (the boers were already vaccinated). So thankful for the help from the Dans in catching and holding critters. I realize that I really need a goat stand/headpiece to use to do this work. Most need a hoof trim, so that's on my list of things to get.

Oh, the names? Well, they are acquiring names.

Stupid-- what both Dans said when the little black buck walked up to the boer buck with an attitude.
Quisling- the large white wether-- D3 noticed he's always looking out for himself.
Billy Bad A$$- the Boer buck.
Belle and Doll- the yearling Boer does came with these names and answer to them.
Whitey- the other white wether. Likes to lock horns with Quisling
Oreo- original name of one of the pygmy does. She a black agouti with a white middle.
So the three without names are the brown Nigerian/pygmy doe (she is the head doe in this herd), the tan wether, and the other black agouti doe.

I have applied for a Scrapies herd number and plan to tag all of them, especially the kids, who will NOT have names...

Posted by Unknown at 8:43 PM No comments: Links to this post