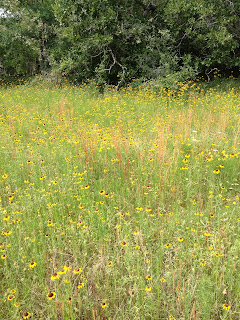 Quick note that summer officially got to Texas about a week ago-- yellow flowers predominating (I'll blog about that soon) and the thermometer pushing 100 degrees were pretty strong clues. However,  there's been a lot of El Rancho progress this week, so I decided to get to that first!


Progress!  That's what I like! What a busy, productive ten days. The last weekend of April, Dan and I went to El Rancho and worked pulling and stacking brush. Very tedious trying to clear along our property line because we can't drag the brush down the road. These maneuvers involved tight turns and limited space for two tractors.

So, we talked about finding a brush crusher smasher mulcher to come and do the work for us. I figured there had to be someone nearby, so I threw out a request for a rec on TexAgs on Monday, talked to Todd on Tuesday, met him after work on Wednesday, and he showed up to do the work on Friday! I am so delighted with the work. What would have taken us several weekends (months and months!) to do is taking him a day and a half. In addition to clearing all four fence lines, he will chomp a path across the middle for a major cross fence. "Brush bustin' " pictures are on the El Rancho facebook page,


Speaking of fencing, the Board at Producers Coop met on April 30 and they decided I was in! I got the letter on Thursday. This means that I am now a partial owner of the Coop and will share in the profit based on how much I spent that year. What a deal! Plus, they have some great workshops and a wonderful feed mill. We had already decided to buy a few thousand dollars of fencing material there, so now it will be even cheaper! 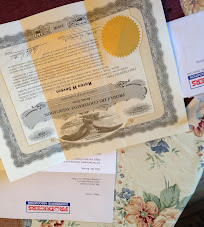 On Friday at lunch, I went out to El Rancho to see how the brush chomping was going. While I was there, my neighbor, Frank Leggio, drove by and stopped to chat. He'd just gotten my letter asking about tying into and improving the fence line we share. Knock yourself out, girl, he says, then goes on to say we might think about tying into his lake so we would have water too! I'm so fortunate to have a great neighbor. And, speaking of neighbors, when we were out showing Todd the scope of work, our other neighbor's mom stopped by and we chatted about her son's new offshore job. Found out he'll be here next weekend, so we'll get a chance to discuss common projects (he has a barndo in progress right now).  My third neighbor, Rodney, also stopped and let us know he has sold his 20 acre place and filled us in on the new neighbors who will be living there. Fingers crossed that they will be great too!

On Saturday afternoon and most of Sunday, we burned brush piles, walked the fence lines and made a shopping list for fencing materials. Dan got to meet Mr. Leggio and I discovered that he is a retired Arson Investigator from Houston and we have a common acquaintance from his HFD days! How's that for a small world! We are going to start on the Leggio side first as it will be the most challenging (taking fence down, inserting some new posts, pulling goat wire, and keeping his cows in!).

All this work has sped up our goat acquisition calendar. Learned today that it's a good practice to not move bred does to a new place and to not breed does until they've been at the place for two or three months. Allows them to adjust to the new forage and browse, as well as the new worms. So, if I can get some does by September, we can be all set for spring kids! Closer to fence, one t-post at a time...
Posted by Unknown at 11:26 AM