As soon as we fenced around the corner at PR 4041 and 4057, I began shopping for a small trailer to use moving goats and donkeys. we already have three flatbed trailers with low sides, but they are no bueno for moving animals. I began my search thinking it wouldn't be too hard to find something at a reasonable price.  I looked at some trailers that probably couldn't get down the driveway, to fancy ones that cost more than my first house. What an assortment! I looked at stock trailers, horse trailers and specialty goat trailers. Single axle, double axle, wood floor, rubber floor, living quarters! Finally, I found what I was looking for and it was just down the road near Frenstat.

The octogenarian owner said the trailer had been sitting in the barn for many years and was seldom used.  After seeing it, I realized she wasn't exaggerating. The paint was barely scratched and everything was still solid. This 1981 Neckover bumperpull is fourteen feet long, and has a combination slide/swing read gate and an interior gate as well.  Built in Troup, Texas, the trailer sports the original stickers and I also got the original proof of sale document. The tail lights will have to be replaced as the connectors and such are outmoded, and I'll probably get rubber floor mats. The only area not in great condition are the hubcaps.  Mrs. Josephine, the seller,  told D3 that a wire brush would "take that rust right off!"  Well, having been in the Marine Corps for nearly five years and afloat, D3 knows a thing or two about getting the rust off and he is not interested! 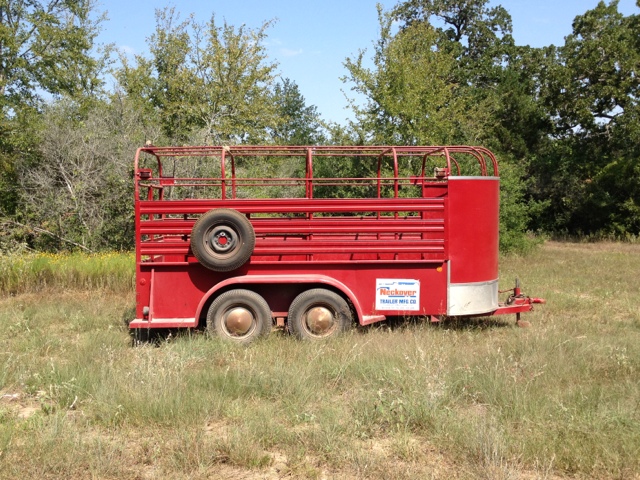 After parking the trailer at the ranch, Dan and I strung and tied the upper and lower barbed wire along 4041 while Dad had to work during the Aggie football game. On Sunday, we all climbed into the silver truck and headed out to Snook, where we stayed all day, working on the Leggio fenceline. The guys cut down two trees to finish clearing the path along the fence. Boy! That really opened up the view and showed us the work ahead of us. We removed most of the old fence and all of the barbed wire from the corner to the bottom of a swampy area which is currently 'mostly' dry.  About 100 feet.  Built three Hs, drove t-posts and strung up goat wire. We also found a nest of red wasps who took a distinct dislike to Dad.

Still waiting for the surveyors to mark off the land next door. Drove down to see if they'd been there and see that LB had someone grade and scalp PR 4057. Alas, no new survey flags, but it won't be long. Then we will begin a new adventure of removing a decrepit trailer house, reconditioning a water well, and staking off places for our new barndominiums.
Posted by Unknown at 8:19 PM