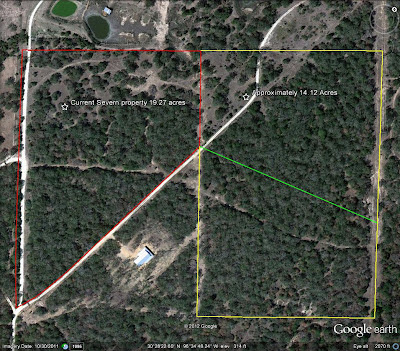 What a week. On Thursday, we finally signed the paperwork for an additional 14 acres which is adjacent to El Rancho. So we have more than 33-1/3 acres now.. Lots of room! Where it's marked "Approximately 14.12 acres" is the area we are calling Danny's Wedge.  This is where the well is located, as well as a derelict trailer house-- talk about creepy! He got busy clearing things up right after closing. He's got some great ideas for a homesite, garden, and septic.

On Friday, the guys did some work out at the ranch, but went to Houston to (hopefully) buy a grapple! Dan picked up a part at WCTractor which will convert his front end loader into a skid steer quick attach. A big grapple is like teeth on the front of the tractor. It should reach into the brush and drag it out! This will be useful at the ranch and at the current house in South Brazos. They drove off to Houston with the big trailer in tow. I called the seller and got directions, found a nearby bank where they could get money if they bought it, and off they went to East Mt. Houston and Loop 610 in Houston. Smooooth sailing.

Well, whatever grapple the man was selling (he had a few) was not what Dan was looking for. Too wide for one thing. So, they got back in the truck to come home. On Friday afternoon in H-Town traffic. Things went from bad to worse when Dan had a tire go flat. It took quite a ways to get off the freeway and quite a ways to find a place to pull over and change the tire (with the trailer still attached). Joy.

Yesterday,  I took Dan's truck into Discount Tire in Bryan and got him a new tire, a rotation, and damage certificates for all four. Took 30 minutes! Love this store, it's so much roomier than the College Station one. Then a quick oil change and full gas tank (ok, some kolache from Slovacek's) and I was out to the rancho.

Uh, oh. My sweet donkeys were not so sweet to the Dans or the neighbor dogs, George and Kopper. Now, I had seen George charge the donkeys on Friday, but thought we had smoothed that out. Now everyone knows tht dogs are better than people and make the best friends. The donkeys have been put on notice that there will be no chasing and terrorizing of dogs. I spent a good bit of the afternoon socializing the canines and equines and believe I had some success.
The donks kept wanting to get closer to the dogs and the dogs just wanted out of there. George followed me around the fence line as I checked for missed wire ties or loose wires. I don't know if he was protecting me, or was sticking with me as the chief dog, but it was nice to have a friend along. I haven't had a dog in over four years and having George hang out is nice. Kopper is a rabbit chasing fool, baying at the top of his lungs, warning his potential prey. George will often hear him and go out to see what's up, but I'm not real worried about the rabbits and squirrels at the ranch!

Today, the Dans finished putting up all wire, both goat and barbed, on the original 19+ acres. Danny thinks they should have driven in a 'golden staple', but we didn't have one. Ah, well, a celebratory event nonetheless. About that time, my good friend Kristi (who just happens to be an equine vet tech), came for a visit from Fort Worth with her husband, Jack, who is one of Dan's best friends, too. Kristi and I were determined to vaccinate the donks for all manner of things, including West Nile I picked up vaccs at Coop and Tractor Supply). Simple, right?

Well, the first sign that things were going south was when Fiona, my sweetheart, got all stupid and got away. They ended up getting all wild-eyed and pissy and what should have taken 45 minutes, tops, ended up taking all afternoon. The three guys sat around the trucks, talking. Kristi and I had a donkey rodeo, with bucking and twisting going on, and even a clown (me) who fell on her ass at one point.  I ignored the calls of "Hey! I missed it! Could you do that again?"

Amazingly, Molly went first and really acted well. Food is an amazing tool! At that point, the others trotted off and our real work began. Next, we caught Fancy, my big brown adolescent. Kristi schooled her and let her know in no uncertain terms that Kristi was, in fact, in charge. Pretty sure the term "Whoa!" was learned today. No ifs, ands or buts. Done. Whew, the only one left was darling Fiona, who had unfortunately decided that we were going to murder her. This brought out the latent bucking bronco in her. Kristi let her rodeo in a circle, moving her ever closer to a tree. Once they arrived at an oak, she promptly snubbed her up close. Fiona realized she could unwind herself, but Kristi stopped that with a rope reversal. Shots done. Yep, Fiona and Fancy will be tired and sore tomorrow.

Well, they need to have their second round of shots in 3 to 4 weeks. Think I'll get four panels and build a quick working pen, like Kristi suggested. Would come in handy for lots of uses with donkeys and goats and could be moved to different spots around the ranch.