The biggest surprise at Goat Camp was the cooking, but it also brought us together. Early Saturday afternoon. Tim and Kale (who's 6 1/2 months pregnant, more later) helped Sasha and me load our many bags from HQ to our sleeping quarters. Later on, Brooke (who is Tim's mom) showed up and invited us to the kitchen and asked if we knew how to cook because we would be cooking for camp. Do what? Brooke sighs. Didn't Suzanne tell you that you would be cooking? Nope. Well, someone start chopping onions. 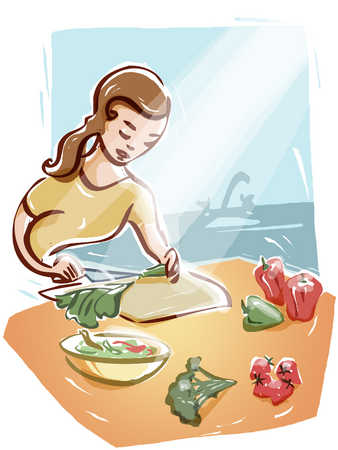 And so we started our cooking odyssey. We sat in the farm kitchen at an eight foot table, slicing chopping, sauteing, stirring and cracking. When you cook as a group, a rhythm develops. While doing prep, conversation flows and we were no different, running the gamut from where ya from, to what's your sign, how goat-y are you, and what do you do. Brooke was an Arizonan who had lived in Okinawa, Sasha was from Ohio, but had lived in Austin a few years before returning to her roots, and me, well, just your basic Texas woman.

While Sasha and I chopped veg and meat, Brooke cooked rice and did a little stir fry for dinner. She gave us some info on OCR and Suzanne. We sous chefs also learned we would be in charge of breakfast as she would not arrive at the ranch until after finishing her bus route. Oh, boy. Waking up that early had not been part of my plans. But I was grateful Sasha was the other sous chef as we plotted how early we needed to get up to cook migas for 60, have it ready and at the classroom by 7:30. Early.

Tim and Kale asked if we'd like to 'ride pastures,' so Sasha and I hopped in the back of the Kawasaki Mule and off we went. Each evening, someone rides pastures to check the perimeter fence, look at the goats to spot any sick or injured, and get a general sense of putting the ranch to bed. On a 250+ acre ranch, it takes a while to transit through all of the pastures, opening and shutting gates, but it was exhilarating, out on the Texas plains, with the gentle sound of goats bedding down, stars in the sky and plenty of fresh air. Tim and Kale are newlyweds, with a baby on the way. They have lived in the ranch house for under three months, but have known Suzanne for quite a while as momma Brooke has worked for her off and on in the past few years.

And so our days were bookended with cooking. Up at 5:30 or so, then class with some morning cooking and then serving of lunch, then class, the cooking at night til 9 or 10. Brooke and Bonnie were there from about 8:30 to 2:30 each day (between their school bus driving duties), and then Brooke would return after finishing the afternoon bus drop off.

We did not have a set menu, just tons of ingredients, plus Brooke brought us more stuff from the store nearly every 20 mile trip from Brady. Input from the sous chefs was always appreciated, and we found ways to use and repurpose everything that was left over or over-bought. 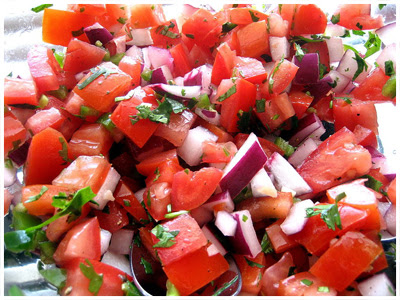 Yes, pico was consumed in mass quantities. We made about a gallon each time and they emptied the bowl. That's choppin' a lot of tomatoes, onions, jalapenos and cilantro. Bonnie was our jalapeno expert and remembered to wear gloves (important safety tip). One night, Tom came down and helped chop, too.

From the first day, campers kept asking if we had a cookbook they could buy and they all assumed we had known one another for years. In fact, they were shocked when we said we had met just a day or two before. Guess that's what shared work and creativity does to a group of strangers-- makes them a team of friends. And that cookbook? Well, it's in the works.
Posted by Unknown at 2:40 PM