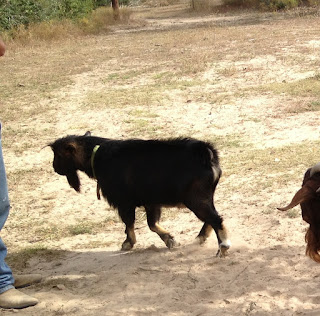 On Tuesday, Danny took ole Stupid to the Caldwell Livestock Commission, and on Wednesday some lucky bidder paid $45 and took him home. So, I lost $11 on Stupid (if you consider that I paid $300 for the six pygmies/Nigerians). And I am ecstatic. He was an irritant.

The pygmies were the initial set of goats I bought and Stupid was odd from the beginning. He always seemed to be sniffing and shoving and bothering the other goats and the people. When we arrived at the farm, he would run up, asking for attention and being a PITA. The donkeys never cared for him either.

As the herd grew, Stupid became more isolated and ignored and a bigger PITA every day. When I vaccinated last weekend, I had Stupid removed from the round pen and was amazed by the serenity. This firmed my resolve to get rid of Stupid.

On Tuesday, I went to the farm after work to help Danny put everyone back in the middle pasture. I noted that all the animals seemed happy.

Today, I got off work early and hopped out to the ranch to check on Big Momma (no kids YET!). I found everyone in the middle of the woods, munching on yaupon and crunching up brown oak leaves. Everyone was happy to see me, including does who had never willingly let me touch them. The brown pygmy ran up to me for pets!

The does were enjoying climbing all over the stumps that Dan dug up, playing King of the Mountain, a popular goat game.

Fiona had a look but decided to keep it safe and stay on the ground.

And love is in the air. Billy BA is getting along quite well with the three new does I bought from the VanderMartins, so we will have babies next May for sure!