Well we are at a spot where we can take a little breather.

We finished perimeter and cross fencing on the 4041 piece. Dan estimates over 1.1 miles of fence, six gates, one solar charger, 10,000 feet of barbed wire. With the cross fencing up, we can manage the livestock and better control vegetation and worms.

We have utilities: water (clean and cold!), electric, and now AT&T 4G service! Plus a fiberglas septic tank and some field lines.

We have livestock: three donkeys and 18 goats. Yep, we have three more. Fred and Gwen, at Rancho Volsas Basias (Guaranteed to have four legs and a tail or double your money back) near Buffalo, sold me three large does, two are 50% registered Boer. Danny and I picked them up on Saturday while Dan put a rebuilt starter in Old Blue and he fired right up!
(Blue is back on staff!).


The new gals are open, so Billy has work to do. Hopefully they will be bred by January. None of the pregnant goats have had babies. 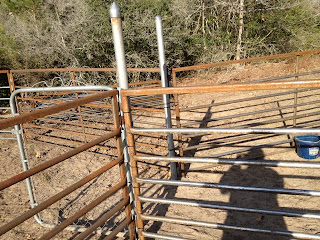 We bought some pipe goat panels and have used the 'round pen' a lot. On our first round of vaccinations, we got all the animals in there and worked them in the big pen.


We haven't had time to build or plan a permanent working area, but the Dans came through with improvising a darn good plan.  They disconnected two panels and spread them apart about three feet. Then, they drove in pipes used for  chain linking and hung a three foot gate. Then they took three panels to make a room  off the little gate. Genuis!

We have a working pen! This created an offshoot 'room' where I could put a goat, lock them in, and take care of them.  Our only real problem is Stupid, one of the most ignorant animals I've ever owned. He's a polled pygmy buck whose ambition in life is to irritate all people and animals as much as possible. He is not long for this herd and we think he finally figured out we don't like him. Anyway, we herded the goats to the round pen and then escorted the donks out. We also escorted Stupid out. What a difference! The goats were all instantly calm, munching on hay, snoozing and ruminating. Very pastoral! In my little room I had a box with vaccines, wormer, ropes, and hoof trimmers. (Did you know a Texmati plastic box makes a great sharps container?).  This confirmed a unanimous decision to take Stupid to Navasota Auction next week. The donks did enjoy chasing him when he got annoying with them...

Danny helped me work the animals. First, we opened the little gate and amazingly, a doe just walked right in! I put a rope halter on her and tied her to the rail, gave her shots, wormer and trimmed her feet. Almost too good to be true! (I don't have a goat stand yet, but Dan said he'll build one later!). We turned her back into the round pen and starting working them one after another. The pygmy does were harder to catch, but overall things went great. Danny was a big help, holding horns and helping drive them in the little room. All of these goats were in dire need of hoof trimming. I didn't get all of them trimmed today, but will chip away at it this month. Plus, some needed a little trimming, followed soon by more because they were too overgrown to trim completely today.

Oh, and we are official. We ear tagged 'Baby' with our official Texas scrapies tag. We are herd #TX 25843

So, it's intermezzo, which only means we slow down a bit. Up next is building Danny's house, selling our Brazos County house, and fencing the 4057 property.