Over the past two years, I have become more water conscious as I have spent time at El Rancho.

Water, without which life on Earth cannot exist. Our bodies are about 60% water and water covers 71% of the Earth's surface, yet less than 3% of water on Earth is freshwater, and a lot of that is frozen. Most Americans have access to clean, fresh municipal water, so sometimes water doesn't seem so exciting, unless of course you live in a Texas town that is running out of water (Seventeen cities and towns are at critical water stages right now).

When we bought the first 19 acres of land, we were waterless-- no municipal, no well, no stock tank. In 2011, like most of Texas, we were in Stage 4 drought, thoughtfully labelled "exceptional" by the NOAA (I think they should have called it hellatious) and we could  hear trees cracking in the wind, which sucked the moisture right our of them. That was the year of horrible wildfires, including the destruction of the Lost Pines of Bastrop, Texas. This all happened before we had our livestock, and, in fact, delayed out entry into animal husbandry... what would they drink? Or eat? Definitely a brown summer.

While we built the perimeter fence, we drank pallets of water, sometimes working for ten minutes and resting for twenty. Finding someone to drill a water well or even get on a waiting list at that time was nearly impossible as everyone needed water, water, more water! When we brought our donkeys home in 2012, we first bought a used polypropylene container, which holds over 200 gallons. We trucked water from Brazos County. Then we bought more land with a well and trucked it a few hundred feet, later advancing to hundreds of feet of water hose. The friction in the water hoses slowed the flow down to a trickle, but it sure beat the heck out of toting water!

A couple of weeks ago, we rented a ride-on trenching machine and laid out water lines to all the established pastures, even going across the road and stubbing it off for the new pastures. So our water only had to travel through 25 or 50 feet of hose to a water tank. Finally, this week I splurged and bought $10 automatic water fillers for each pasture... Now we only need to ensure that the tank looks full and clean. I think of our water journey and realize how hard it was for folks in early Texas. If you didn't have a spring, you dug a well (by hand), or toted water from a river or stream that was maybe clean.

I am grateful for the good, tasty water in our well. So much better than muni water in Brazos County.  (That water has a lot of sodium in it, which makes washing soap off really difficult). The animals seem to like it, too, sucking up clean, cool mouthfuls.

Next on my water list is getting my own well drilled. Dan and I have already decided on a spot for the barndominium, so next is the well. Hopefully, we will tap into water like Danny has at his well. To increase our water security, we are considering running a line from one well to the other. Then, if one well goes down, we could tie in the other house to the other well. 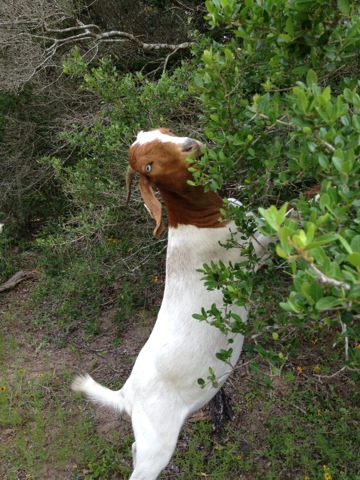 On another note, Billy BA is busy in the middle pasture with the girls. We will be expecting kids in early December. This is Baby, a young doe who will be having her first kids this year. She was the first 'baby' goat we had at the place, bought as an afterthought at the Navasota auction. Although she wasn't born here, she has eartag number 00001. With her blue eyes and Billy's dark red cape, they are certain to have nice looking, stout kids!
Posted by Unknown at 8:23 PM