The last few months have flown by in a whirl. Between trying to get work done on Danny's house, getting fences built, and trying to design a barndo, and taking care of the critters. (let's not even talk about real jobs, too!).  I found time to go to Goat Camp at the end of October, and helped cook up some yummy meals for the campers. While I was out in West Texas, Danny fell in love with a puppy at the Brenham Humane Services. A little white 'wolf' with blue eyes.  He named her Agatha.

Agatha was found estray hear the highway and was dropped at the shelter. Danny was doing some volunteer work there and realized that this was the perfect dog for him.  So when I came home from Goat Camp, we had a new family member.

What a great thing to have a dog in the family again!

Agatha quickly learned about being a farm dog, crawling under gates, hanging out with goats, and staying out of donkey reach. She reveled in the joy of drinking from a muddy hoofprint, or just chewing on hay and sticker vine. I think she really believes she is a goat!

To solve this identity crises, we realized that she needed a buddy, a canine companion, a partner in grime. Dan and I both wanted a dog, but the thought of training a puppy while living in a camper seemed a bit daunting. But by the middle of December, we knew we needed another pup.

I'd been scrolling through the webpages, full of hopeful faces, wanting fur-ever homes.  Dozens of pitties, and chihuahuas, terriers and poodles. Old dogs, young dogs. Beagles and dachshunds. Some had long hair, others short. Dogs with three legs, or one eye, or chewed ears.  How to choose?

So, one Saturday morning, Danny and I went to Brazos County to look at some possibles I had found on the webpages of the Bryan Animal Shelter and the Aggieland Humane Society. Most of the dog selection factors centered on Agatha, her personality and size. Not too big, not too small. Slightly younger, but not too young. Not aggressive, not yippy, shorter hair. Well, we met many dogs that day, who hopefully became great pets for someone, but didn't seem to be right for El Rancho. After seeing the shelter dogs and marking a couple of possibles, we went to the big box pet stores. At PetSmart, the Aggieland Shelter was holding an adoption event and had a corral of big puppies about three months old. One caught our eye, but we decided to visit Petco first, where a rescue group was displaying dogs for adoption. We returned to PetSmart and looked at the three puppies. A volunteer said they had been fostered in a home since birth and were Black-Mouth Curs.

The yellow girl seemed to have a little sparkle, so we filled out all the paperwork, gathered up some supplies, including a huge zebra toy, and headed for the farm. Agatha was a little rough at first, but in no time, the two BFFs were ranging around the farm, with a constant ''dog game" in progress. You know the game, where there is much gnashing of teeth, wrestling, chasing and hugging. Agatha began
developing confidence and assumed the mantle of head puppy dog. We named our dog Hedy (that's Hedy, NOT Hedley). 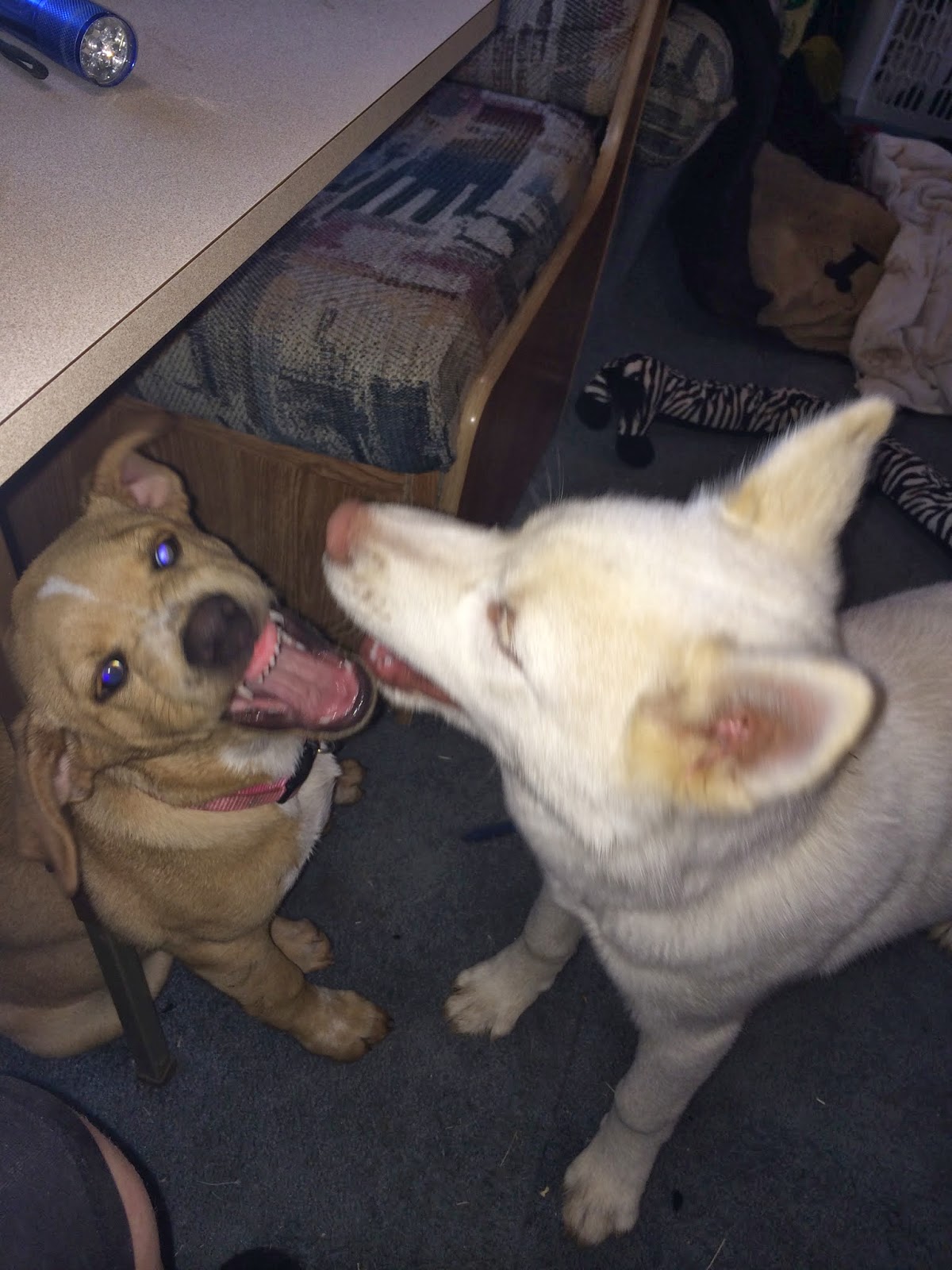 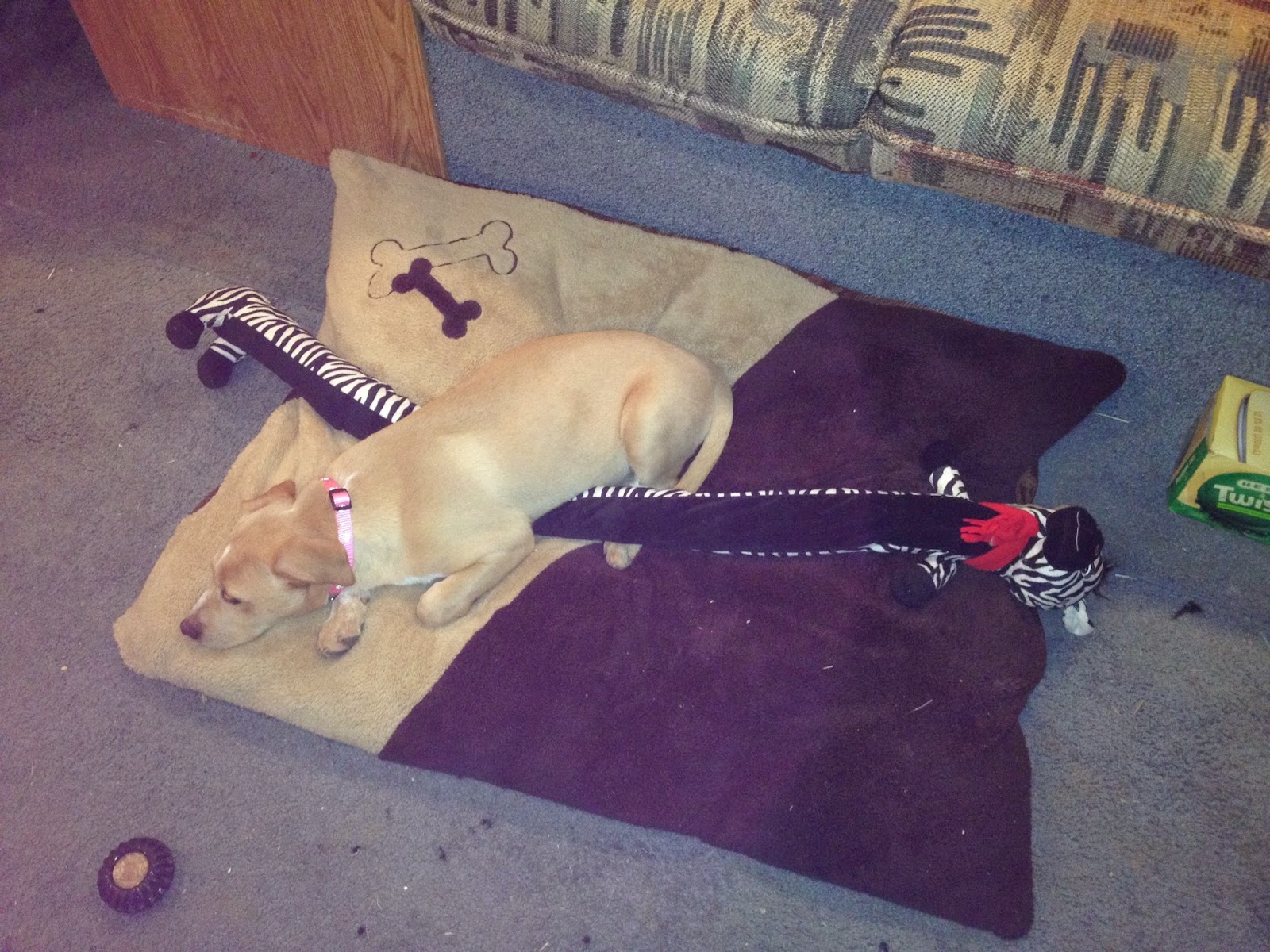 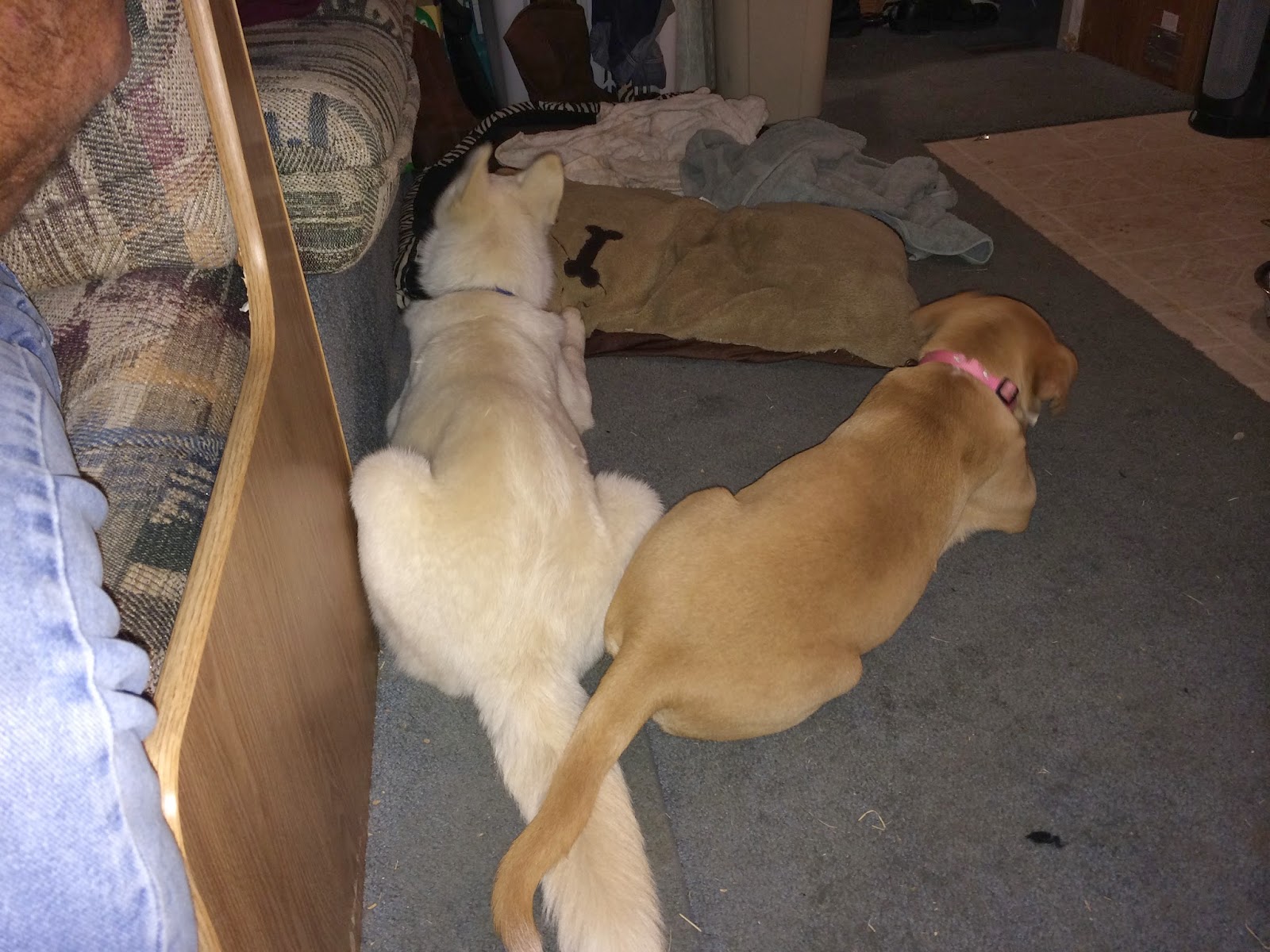 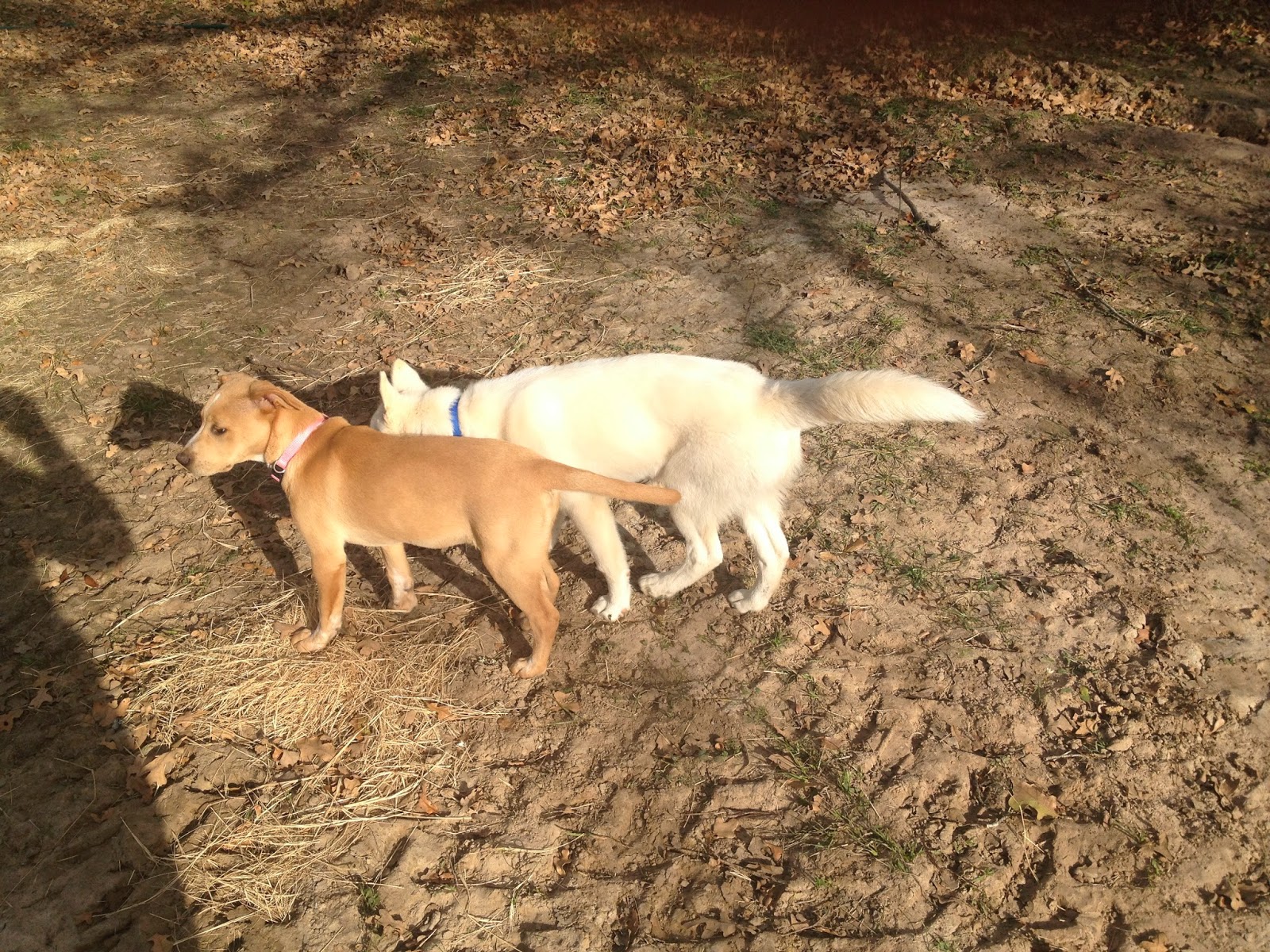 Well, over the winter, the two pups grew and grew, spending all their days together and retreating to their respective homes at night. It's been a cold winter for the Brazos Valley, and kidding started in mid-February. Several ice days, snow storms and downright frigid windstorms had us prepared to do whatever needed for the livestock. On freezing March morning with deep mud, I saw Sister, a pregnant yearling, limping and unable to keep up with the herd. I enlisted Danny's aid and we went to move her from the Big Pasture to the Maternity Ward.

Across the pasture, I spotted something small and white, like a kid. At that time, all the goat kids were still in the Maternity Ward. Upon closer inspection, I realized it was a small white dog. I called her over and she came to me, cold, wet and alone. I brought her in the trailer where we dried her off and got her some food. Hmm. No collar, or collar mark. I thought she looked about eight months old, a cute little Parson Russel Terrier mix. We realized she looked just like the dog on a Milkbone box in Danny's house!

We posted 'found dog' notices in five Facebook groups for Burleson County, Brazos County and the Lost Dogs of Texas. Danny took her to Snook Veterinary Clinic, but Dr. Stein found no microchip. Caldwell Veterinary didn't recognize her and posted her pic on their page as well. Left word at the shelters, posted in TexAgs. I entered her info online in all possible places.

Nothing. Eventually we decided that our worst fears were true: someone had 'dumped' this pretty little dog in the country. Now, I could rant for hours about city people who dump all sorts of animals in 'the country' like it's public land or natural habitat, a place where animals can live in harmony. Yes, and where animals can starve or be eaten. 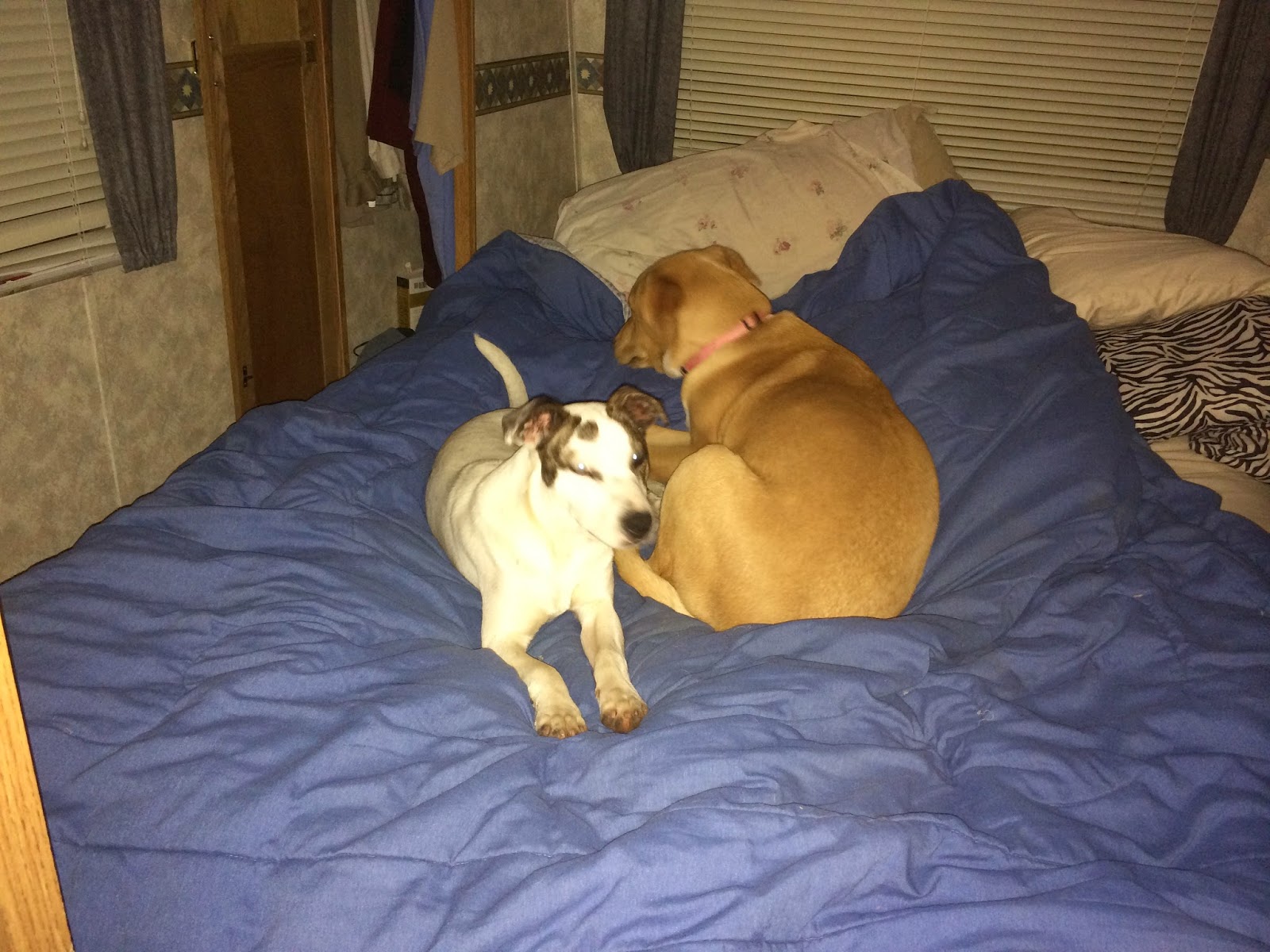 So, little Madeline became the third member of the Severn pack. From the first day, she seemed to blend in with the other two dogs, and they LOVED her. The "dog game" now has infinite combinations and possibilities. We took her to Dr. Stein for a wellness check and shots this week, and the good doc found a spay incision scar! We are dumbfounded that someone would throw away such a perfectly lovely dog, but have assured her that her home with us is secure. 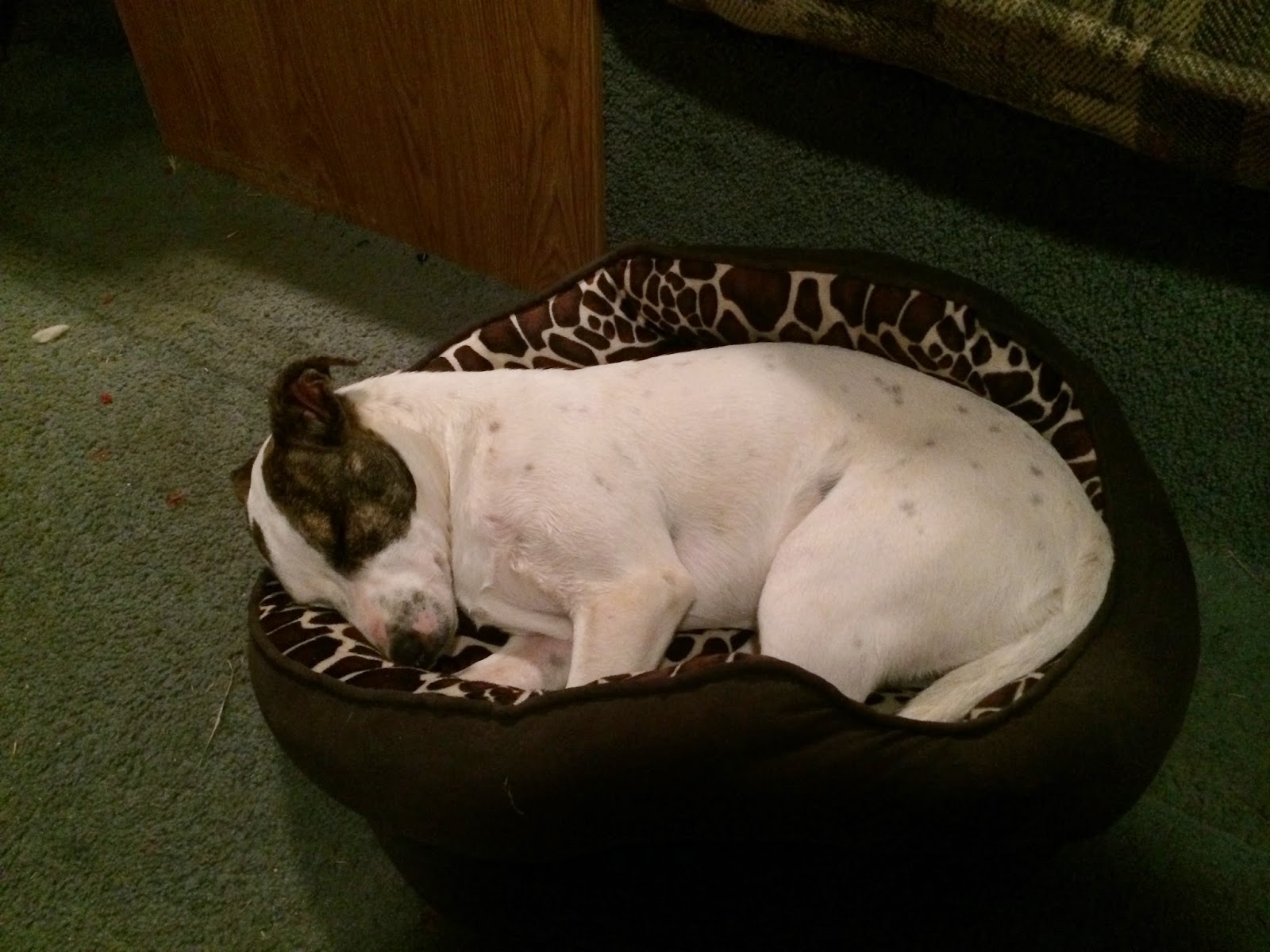