This is our second year of kidding at el rancho. Last year we were total newbies and learned some valuable lessons. One of the lessons was that we decided we needed a more secure place for the does right before kidding. The other was that we decided to be more deliberate and timely in our breeding.

After buying the second property, we planned for a Maternity Ward. Danny chose to put it near his house and last year he plowed, disked, tilled, improved and fertilized the soil, then planted bahia grass. The area is securely fenced with goat wire and barbed wire, top and bottom, and two sixteen-foot gates. There are water taps and shade. Dan moved three goat huts into the pasture and two of them are enclosed into small private areas. So far, so good.

Well, our breeding program was really broken this year, in part because we didn't get the fencing done sooner. In late summer, all the girls were in the lower pasture and the boys were in the Triangle. Separated by two electric fences. Now, generally, the electric fences work pretty good for interior fencing, especially with an empty field between. However, on September 18, we found the gate between the Triangle and Middle pastures was open! Donkeys? Clever goats?

Well, it didn't matter, any 'damage' was done. We caught Jupiter with Riker (a goat formerly known as Baby), and Billy BA was strutting  around. In my notebook, I wrote down the names of does I suspected of being bred and (in large letters), "We'll know in February."  Most goats are pregnant for 150 days, so if they were bred on September 17, they would be due on February 14-- Valentine's Day!

On September 24, Billy BA had a planned breeding with Big Momma, Khaki, and Little Sister. (That would be February 21). Finally on October 9, Billy and Jupiter AGAIN got through the fences (due date of March 8).  After we finally got our fences erected, Billy BA was with several ladies from November 3 to December 15 ( this give us April 8 - May 15).

The kidding storm is much anticipated. How many  kids will a certain doe have? Will she have enough milk? What color will their eyes be and will they be white or some other color? So, I really thought that Curly and Maggie would be first. I was wrong! Of course, the mystery of 'when' is all covered in the Doe Code of Honor. 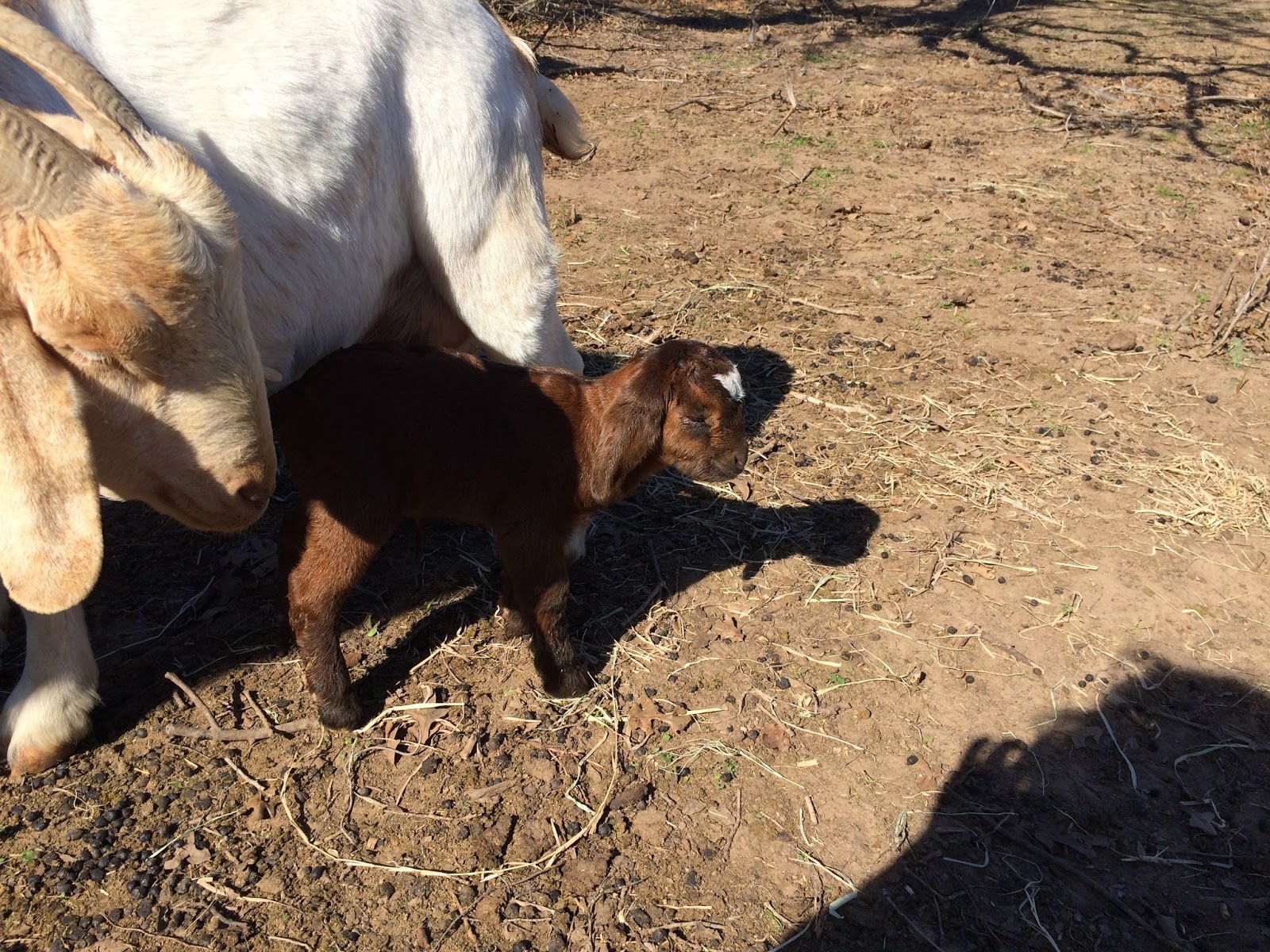 Feb 15- Flower had a single chocolate doeling. She developed severe mastitis so the doeling was getting supplemental bottles. Being fed three times a day, she picked up the name 'Stella' for the white star on her dark head. Father? Billy BA.

Feb 17- Z2 had triplets in the afternoon! Two doelings and one buckling.

Feb 19- Big Momma had triplets! Two bucklings, one doeling. One buckling looks just like Billy BA, so he immediately was named Minime. the other buckling has a red head and cape, and dark brown feet, ergo, Spats. No doubt their dad is Billy BA.

Feb 21- Belle had twins about noon, both white with black heads, one boy, one girl. About 5 p.m., her sister, Doll, kidded and had one huge buckling and one preemie looking buckling. We were unable to save the little guy. Based on eye-color, we see Jupiter's first three kids!

Feb 22-  Curly finally kidded!  This was her first time,so were both nervous. The first kid presented with one leg and a snout. I was unable to get the other leg forward, but Curly managed to have the baby. The second boy arrived smoothly. Their names? Larry and Moe. Again, blue-eyed Jupiter was the papa.


Feb 28- Khaki had one huge single doeling in the large pasture across the street. Did not think she was so close. Fourteen pounds! Wowzers! Khaki was 'due' from the breeding with Billy BA on Feb 21, but this might be correct as that kid was giant! She looked a week old when born!

On Mar 5- Riker had two doelings, parentage unknown. Riker is also a first timer and I was glad to see her cleaning up the kids and making milk. Haven't gotten a good look at her girls yet, but she and Jupiter were always tight, since they were kids last spring.

So, all of these does got pregnant BEFORE the herd went to pasture with Billy BA. Who is left to kid? Fea, Heifer, Z1, maybe Red Spot. I think Fea and Heifer will kid in the next couple of weeks. Z1 and Red Spot will be due in the middle of June.At the end of the kidding storm, we got by accident what we wanted to plan! A short kidding window for a large number of goats. 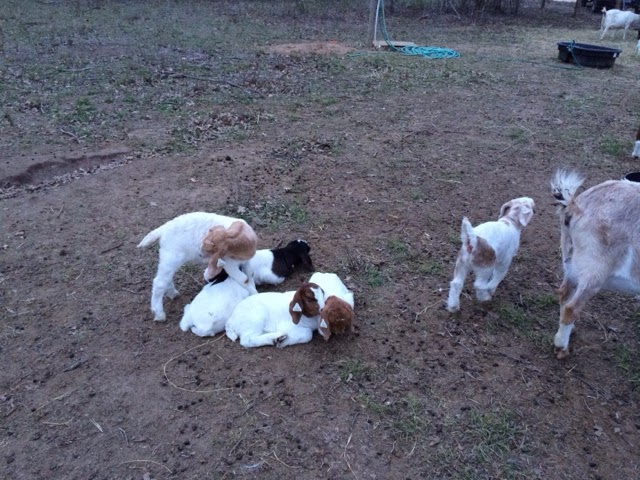