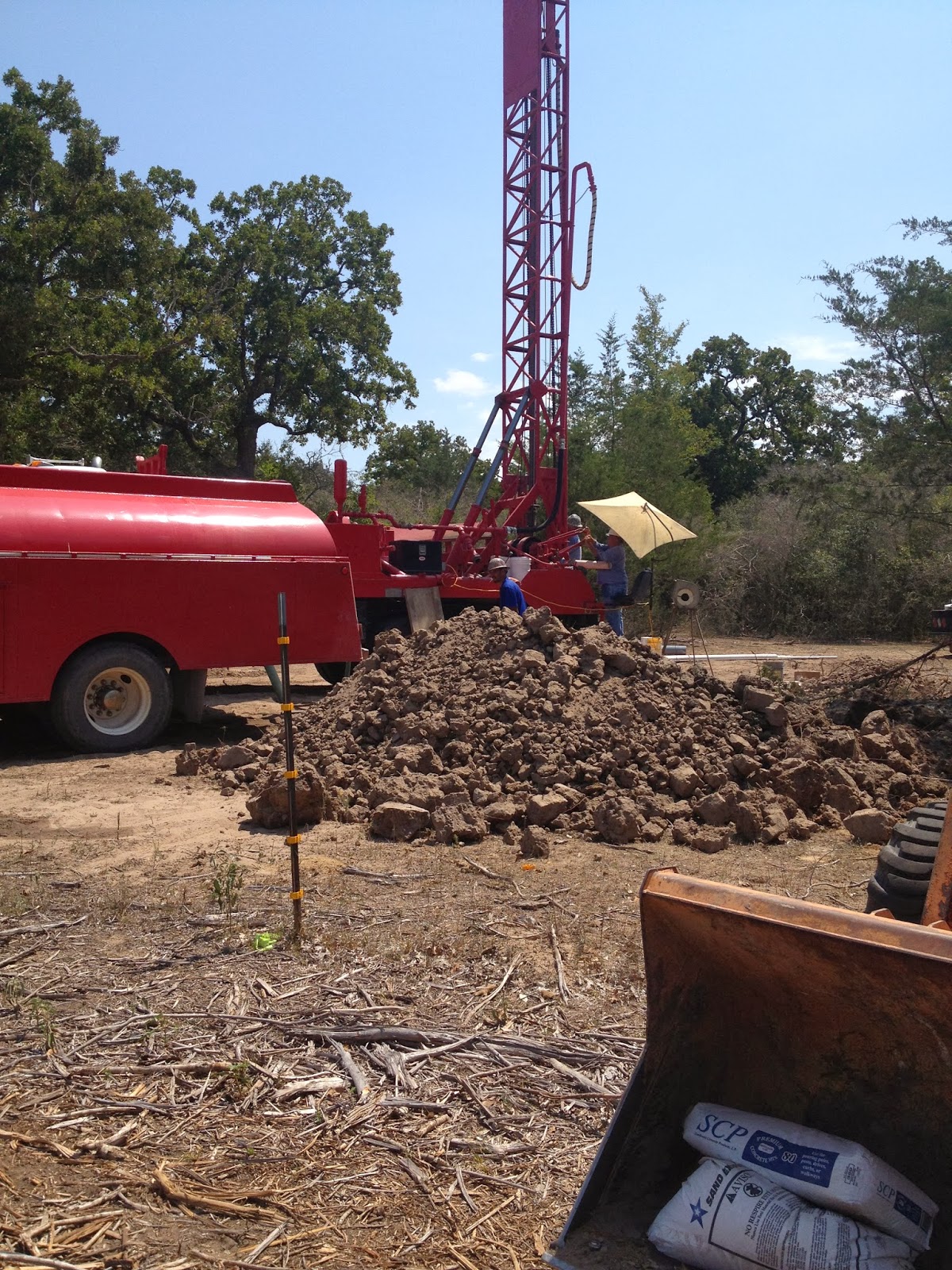 For those who follow (or used to follow) that Asno Blanco blog, we're back! In the past five months, we have been really busy, but almost standing still in some ways. I wrote a couple of half-baked entries that I never published and they will just quietly have their electrons erased.

So, I'll try to catch up on what has happened:

September- The water well was drilled at the 4041 homesite and we had the electricity turned on. The guys erected a fence and gate to separate the lower pasture in two. Billy and Jupiter got the gates open and visited the ladies in the lower pasture.  I noted it down in my composition book. Now, this notebook has saved me many times. You can run livestock well unless you know what happened and when. Note-- the boys got in the lower pasture on September 18 (these dates will be important later). 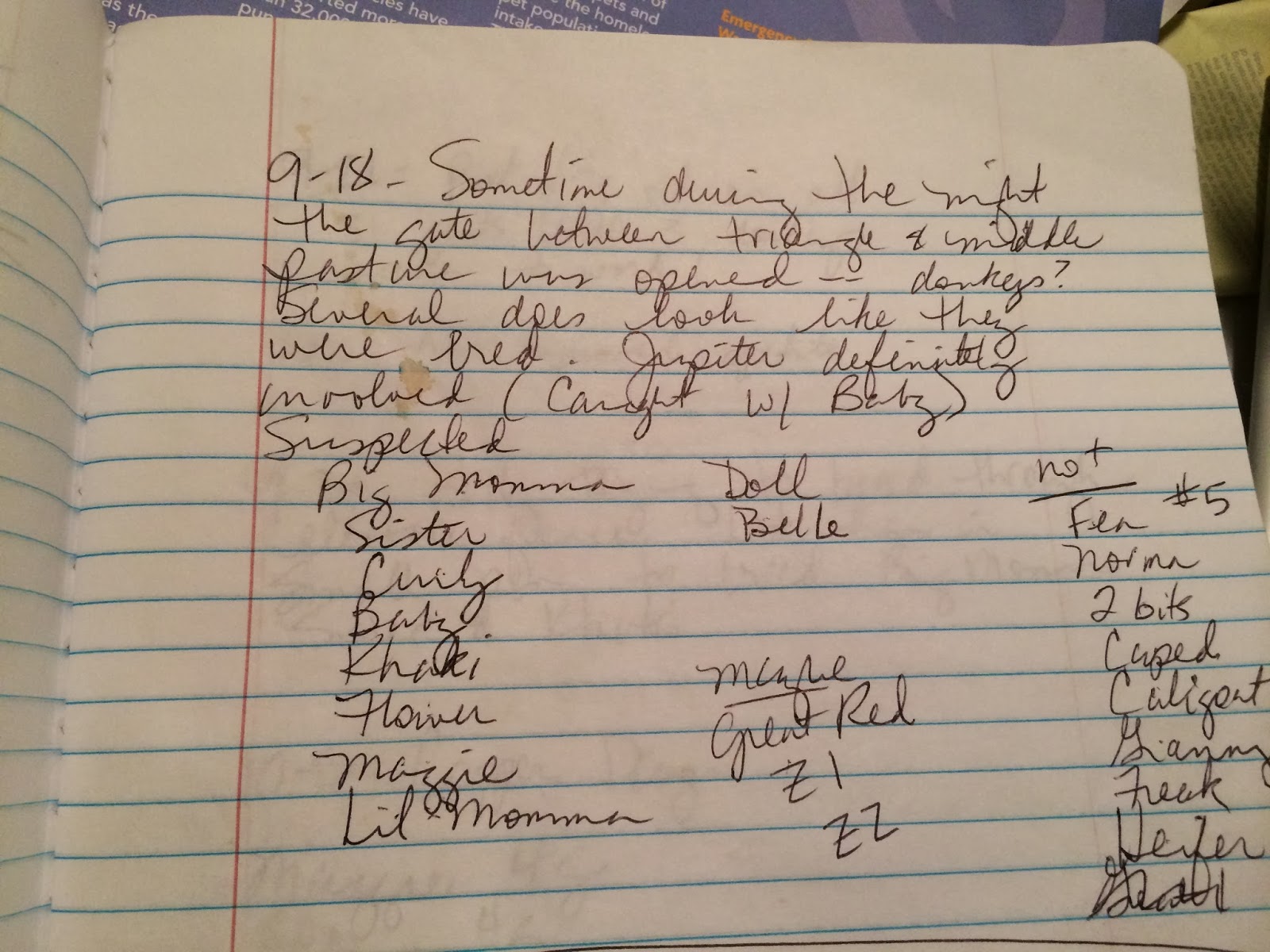 October- Ahem. Billy goats got down to the ladies again (October 9). We hired a fence builder to erect fence at the 4057 property. Great fence! Best of all, it was done in a few days. Our 'Goat Alley' system is starting to take shape, whereby we have alleyways to and from pastures and can move goats in them. Once we improve the fence between us and the neighbors, we can turn goats or donkeys out in the alleys to keep them 'mowed.'

I attended Goat Camp 2013, once again learning about goats and
cooking for the paying customers. While I was gone, Danny met a dog at the Brenham shelter who he knew needed to come live with him. Tiny little white shepherd. Her name is Agatha.

November- With the new fenced areas, we turned Billy BA out with does of breeding age, and put the younger goats in the Maternity Ward pen, which is adjacent to Danny's house. They quickly ate all the yaupon and sticker vine.... in a month!

I prepared Thanksgiving dinner in the camper! The local VFD sells fried turkeys, so that solved my oven problem. I bought pies at HEB, and cooked the rest (dressing, gravy, green bean casserole) in the camper. I am thankful that I get to live in the country and that both my guys were there.

Agatha got very sick and after the vet ran blood tests, she said that the liver enzymes were off the charts and that Danny should just feed her whatever she wanted and give her a lot of love. Found out later that the vet (Dr Marsha Stein) truly thought that Agatha wasn't going to make it. However, we DID baby her, cooking ground beef and other tasty treats for her.

December- Dan and I started getting serious about our Barndominium plan. We decided to go with Willis Custom Homes as our contractor. Now, it's not just ideas, but a plan! We ended up with a 40 x 80 foot metal building, 16 feet high. At one end, we have a large one bedroom apartment, with two baths and a dream kitchen. At the other end we are going to build guest quarters with a bedroom and bath. Above the apartment will be (in the way future) a super large craft room on the second floor. Three sides will have 15 foot shed roofs and a lot of that will be porches. Looking out over the land! 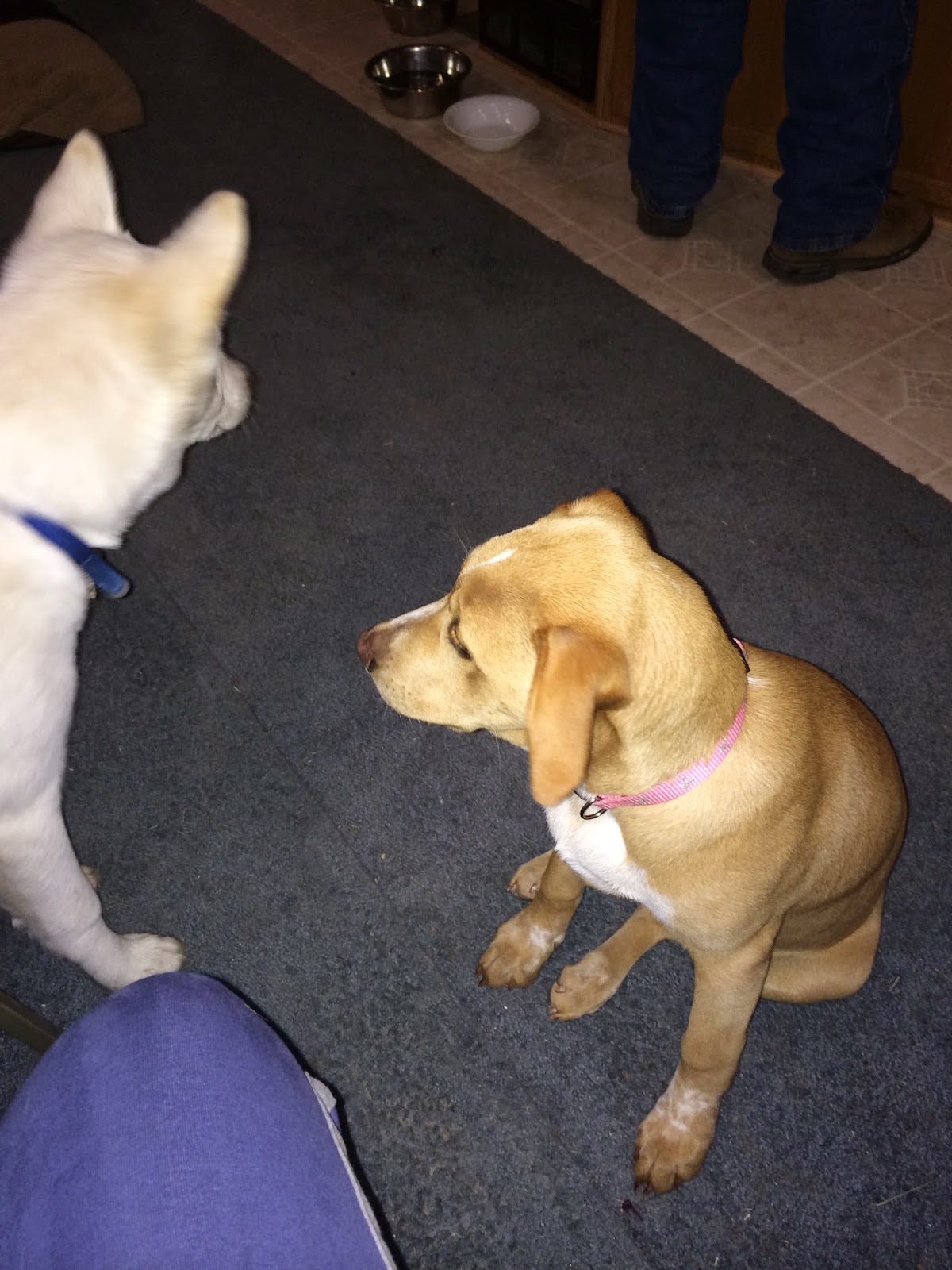 Agatha is very healthy, but very bored, and somewhat cringe-y.  In the middle of December, we decide she needs a friend. Danny and I got in the car one Saturday and went to four different human society locations. We found a puppy from Aggieland Humane Society at PetSmart and she seemed to fit the requirements-- slightly younger than Agatha, big like Agatha, and cuddly. Her name is Hedy. Yes. Like Hedy Lamarr. She a beautiful blonde. Her mom was a Black Mouth Cur, like Old Yeller, and they think her dad was a lab, but I suspect some kind of hound.


January - Cold Winter!  Wow! In the camper, we have a Super Slide, which means our dinette and couch area can slide out, creating more room. However, it also means the floor is really cold! So happy I bought space heaters to augment the propane central heat in the trailer. Danny's house is well-insulated and two little space heaters keep it warm.  The water supply for the camper is a garden hose, so a couple of times, our water froze in the hose! Dan buried the hose under dirt, hay, and old carpet and that seems to have done the trick. With a three gallon water heater, it's still challenging to wash my hair and my body in the same shower... 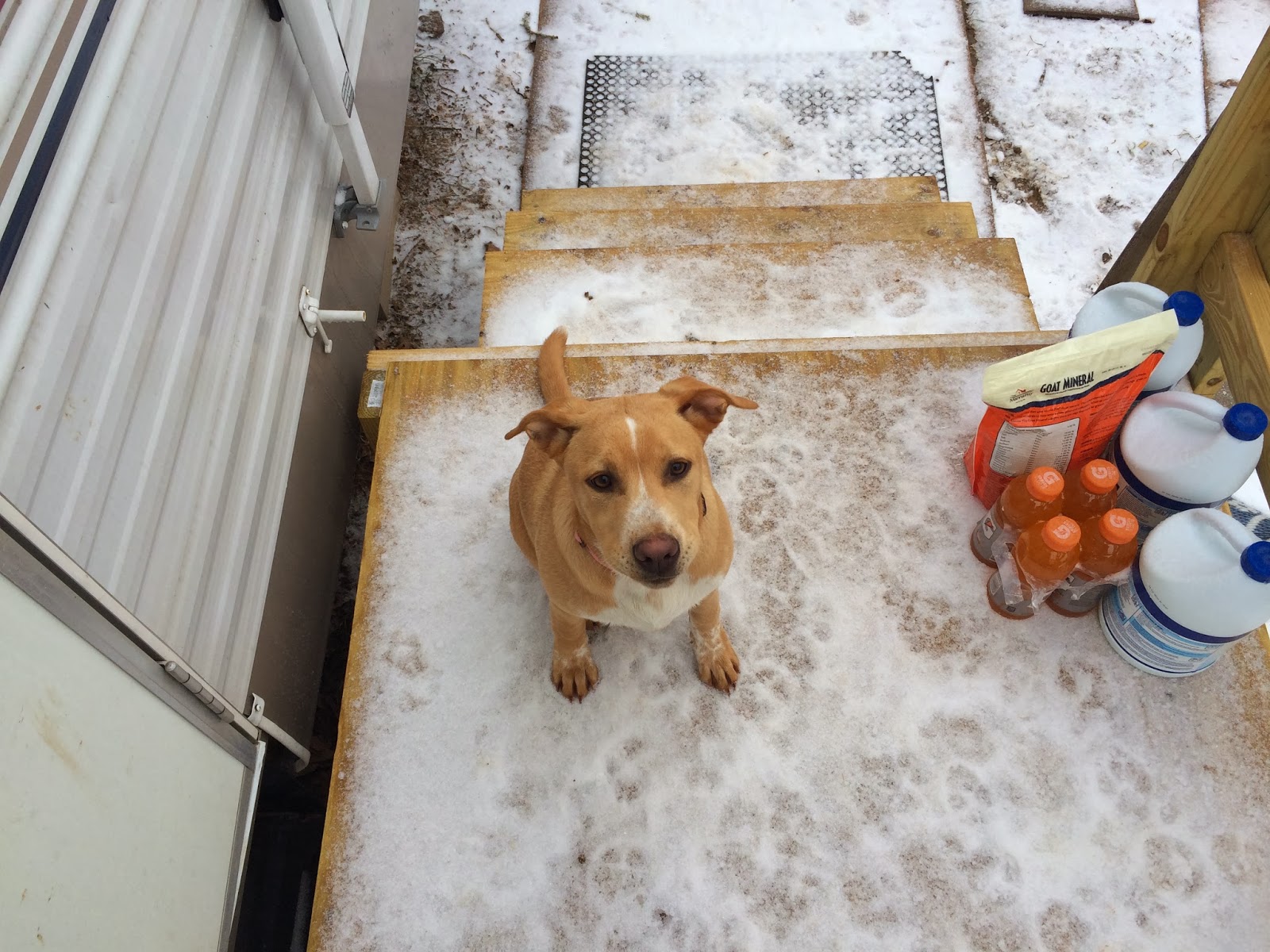 We had a couple of ice days at the University, where I just stayed home rather than attempt to drive across some major bridges. Odd how much colder it gets in Burleson County; I guess since there is a heckova lot less people and buildings, it just freezes!

Even though it's cold, critters must be fed. I don't envy my town friends at all, with their cozy fireplaces and gallons of hot chocolate. I gladly get up early and brave stinging winds and bust up frozen troughs to take care of everyone. Living in the country is definitely for me!

In January, we also finalized our Barndo plans, signed contracts, and started planning what to build on the inside first. I vote full-size shower first! I can't wait to have unlimited hot water and room to turn!

February was full of goat news, so I'll leave that for the next installment (which won't take five months!). 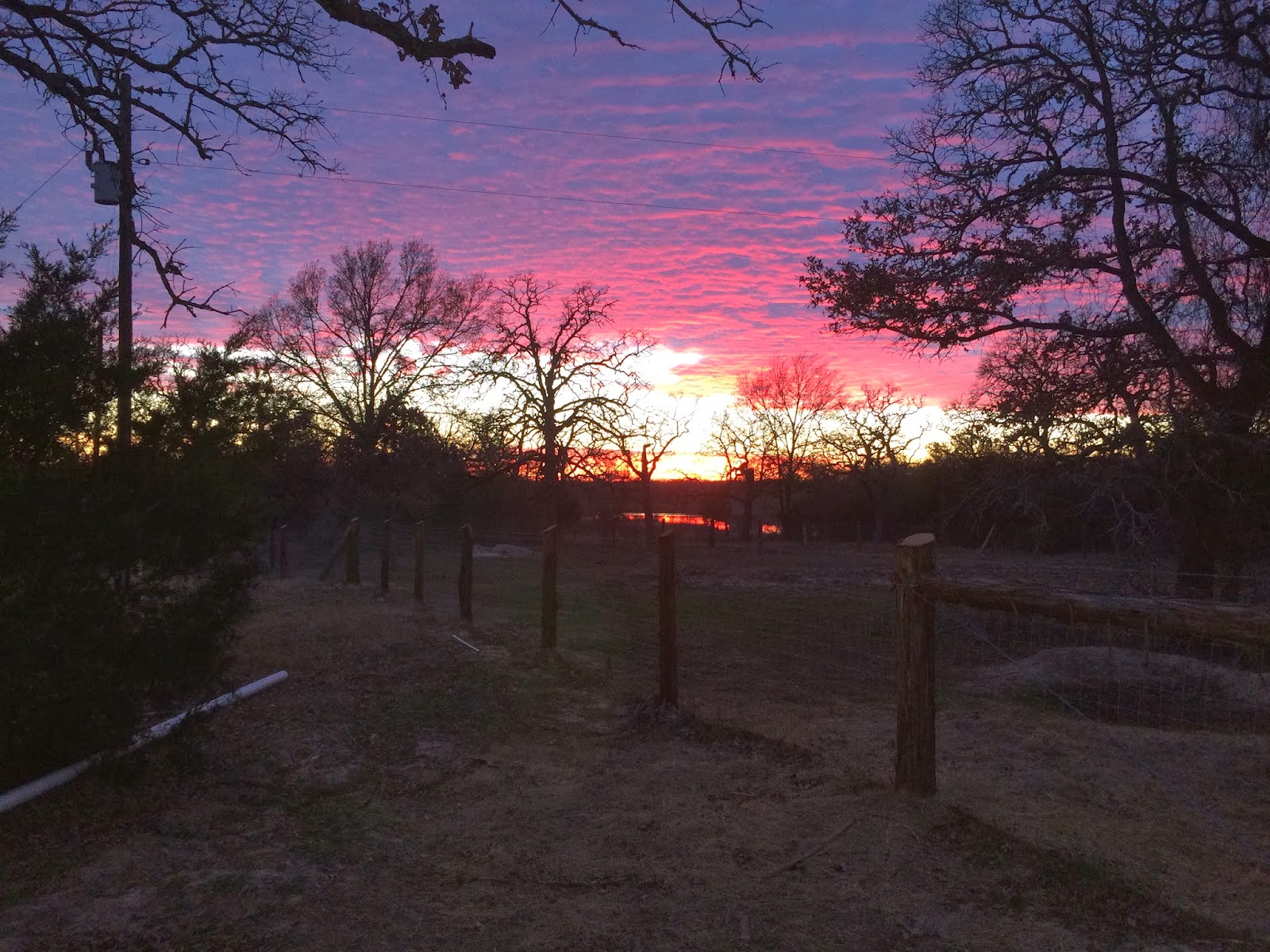